Fate of Nations at BHC 2019, Cartagena

The prestigious Business History Conference took place on 14-16th of March, in the UNESCO World Heritage Site of Cartagena de Indias. This was not just the first time the conference was held in Latin America, but was also among the best ever attended BHC conferences. The theme of the conference was "Globalization and De-Globalization: Shifts of Power and Wealth", which naturally lent itself well to the research interests of the Fate of Nations group. Professors Pål T. Sandvik and Espen Storli presented a joint paper titled "Small States and Monopoly Power: The International Oil Industry and the Scandinavian Market, 1890-1930", with Espen Storli attending as one of the six members of the program committee. 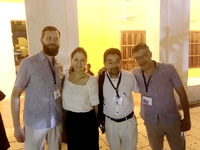